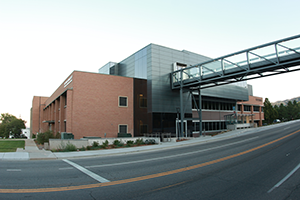 The newly-refurbished Rio Tinto Kennecott Mechanical Engineering Building has gone for the gold.

The building that is home to the College’s Department of Mechanical Engineering has achieved a LEED Gold certification after the building’s latest upgrade – the installation of a solar panel array on the roof. The architect for the $24-million renovation, Derrick Larm, said the new 34.2-kilowatt solar panel system, which was installed earlier this year and is comprised of four separate panels on the roof, provides an additional 5 percent energy-cost savings per year for the building. The Rio Tinto Kennecott building now is one of seven U buildings on campus with the Gold certification.

The LEED, or Leadership in Energy and Environmental Design, is a certification rating by the U.S. Green Building Council for highly efficient, cost-effective green buildings. The Rio Tinto building at 1495 E. 100 South originally achieved a Silver rating when the renovation of the 65-year-old structure was completed in 2015.

“With what we were originally doing, it seemed like LEED Gold was within reach, so we made that our goal so we could go above and beyond the university standard,” Larm said.

What began as a 54,000-square-foot building built in the 1950s for Kennecott Utah Copper Corp.’s research offices has now become a 76,000-square-foot U lab space with the latest in energy-saving technology and safety features.

The building now has energy-efficient elevators, a chilled beam system for air conditioning and a heating system that use much less energy, new walls and braces for earthquake stabilization, a horizontal fire shutter above the atrium designed to stop the spread of a fire, and a new pedestrian walkway called “Job’s Crossing” that connects the building to the rest of campus for safer pedestrian traffic.

“It’s a complete renovation, and it’s amazing that we took something that had no insulation and get it to a place where it is performing 40 percent better than a code-compliant building,” Larm said. “The swing in energy efficiency is just enormous.”

All told, these energy upgrades will save the building 32 percent in annual energy costs, he added.

“The College of Engineering was an amazing partner that was really focused on its sustainability goals,” he said. “We couldn’t have asked for a better partner in making that happen.”